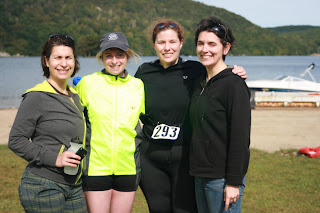 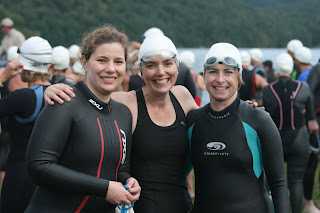 Well, Barb predicted right. I hadn’t even read her blog when I was calling her telling her it was my best one yet, mainly because I was shocked at my swim time. But this race was also great because I recruited three others, including two first timers, all of whom had successful races.

It’s funny – I didn’t remember Barb’s hypothermia story. I do have memories of some very cold mornings at our bus stop and freezing fingers and toes (especially when I forgot my gloves), but I don’t remember her specific incident when I returned home to a diagnosis of hypothermia.

Speaking of being cold, yes, when I arrived at the race site at 6:00am, it was a frigid 45 degrees. This was quite a contrast to my Wednesday night run along the NYC Hudson River path after work. I had packed a long sleeve shirt thinking how the days were getting shorter and cooler, only to find myself taking it off and running in my sports bra as I was dying in the high 80 degree temperatures. I was thankful that I felt better running than I had in the last month. My plan to get more running practice in between my last race and this one had not come to bear after I went too hard on our hilly CT roads and jarred my knees. I took a short break from running and then tried the treadmill but also felt pain and so I stopped. I did a light jog on the gym’s short indoor track one day and felt ok then but it hardly counted. Last weekend, I tried a different, less hilly route around our house but still had to walk the small hills.

Without the ability to run much, I had focused more on my swimming and also hilly bike rides knowing this would be a challenging bike ride. I swam my best .25 mile pool swim time on Thursday night before the race at 11:15. In the last month, we did two 42 miles rides on Martha’s Vineyard out to the hilly part of the Island. I was having some problems with my bike gears and while popping a chain was never much of big deal for me, when you are clipped in with bike shoes, it adds a new level of fear of falling over when it happens. Fortunately, when it did happen, I got out of my pedals in time. But, I could not get the chain loosened up and back on the crank despite getting my hands completely black with grease. Mike was long gone ahead of me, but a runner who doubles as a good bike mechanic helped me out.

So, as we lined up in our waves and tip toed in bare feet amongst geese shit booby traps, it was COLD. Fortunately the water was warmer than the air and so the swim didn’t bother me. I forgot to start the timer on my watch so I clicked it about 75 yards into the race. I really wanted to try and do the swim 100% freestyle – I did about 90% of it freestyle and resorting to flipping over on my back a few times to slow my breathing down. I think hearing someone calling for the lifeguard’s help made me more cautious than I needed to be. But, as I rounded the second buoy, I did pick up the pace and go for it. As I got out of the water, I looked at my watch and it said 9 min and something. Hmmm, I thought – I guess I was farther into my race than I thought when I started the watch.

Onto the bike, I decided to grab my jacket knowing how cold the air would feel. Trying to hurry out of T1, I didn’t bother zipping it up, figuring I would at some point. Before I knew it, I was clipped in and riding and realizing there was no way I could zip without stopping so I pushed on with it flapping open. The bike ride was hilly as I knew it would be, but equally tough the road was very rough in spots. In addition, while the road was technically closed, it didn’t stop cars pulling out of their homes in this very residential area so cars were getting in the way of bikers. I passed two people with popped chains on hills, including one very pro looking type with his Cervelo. About ¾ of the way into the race, I could no longer shift from my first crank to my middle crank for more power on flatter surfaces. I’m not sure if it was my cold hands or an actual problem with the bike. There were still some up-hills remaining so I guess it was good I wasn’t stuck in a higher gear, but I could have gone faster in some parts.

As I started into the run, I realized how numb my feet were and by the time it was too late, that I had forgotten to attach my race number (a DQ in some races but fortunately not this one). I only started to feel my toes about half-way into the run! As I approached the park and saw Mike, I started to pick up the pace. I didn’t realize I still had about a half mile to go but it probably helped my pace overall, even though I didn’t have the same amount of fuel left for a last 100 yard sprint at the finish.

When the results were posted, I was shocked at my swim time of 10:47! Finally, my swim didn’t completely drag down the rest of my results. I was happy finishing 11 out of 34 in my division, and 135 out of 226 overall.

While triathlons are very much an individual sport, there is a big camaraderie amongst triathletes. I’m really happy to welcome my first timer recruit Allison Sample and her recruit Holly Moore into the club. My work colleague and a tri-veteran, Jinan Martini, also joined us. It’s hard to believe that it was just 3 months ago that Jinan was toasting me with a cocktail congratulating me on my first race – when I was happy just to have survived!
Posted by Cathy at 9:18 AM