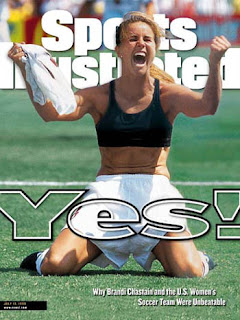 There was a moment last September when I was running down the path along Manhattan’s West Side in preparation for my last triathlon of the season. It was a beautiful evening run with the sun setting and glistening on the Hudson River and Lady Liberty standing tall in my view. I was feeling good that the pain in my knees that had been bothering me for the last 3 weeks had dissipated and that my pace was up despite my recent lack of running. But, it was unseasonably HOT. I was cursing that I had chosen to pack a long sleeve top that morning upon leaving my house. Then, it occurred to me there was an alternative – I had my sports bra on underneath my shirt.

It took me another five minutes of internal debate whether or not the right thing to do was just to strip the shirt since it had never occurred to me to workout in my sports bra. I was trying to envision the women in the gym – surely I had seen some of them working out in halter type outfits, whether or not they were a sports bra or not, I was unsure. And, there was that woman in the Nantucket Triathlon whom I had passed and ultimately beat – the image was very clear that she had been wearing something less than a shirt. But, there was something nagging me keeping my shirt on until I was so hot that I finally said the hell with it, ripped off the shirt, and went on to turn around for the second half of my run, waving to Lady Liberty and not caring what anyone thought about my freedom to wear what I pleased so I could insure a good workout.

After watching a fantastic movie last evening, it occurred to me why perhaps there had been a nagging thought in the back of my brain. As logical as I had thought about the fact that my swim suits were more revealing in public and that other women were certainly not always covering themselves with shirts, there once was a controversy that had put the issue on the front of the newsstands – it was the end of the 1999 World Cup when the American Women’s team had just beat the Chinese in overtime based on penalty kicks. Brandi Chastain, was just doing what the guys do when they win, she ripped her shirt off, revealing her sports bra, and fell to her knees in exultation for their magnificent victory. Somehow the models who pose in the Sports Illustrated Swimsuit edition are sexy and Brandi on the cover of Sports Illustrated, Time, and Newsweek was a controversy?!

I thoroughly enjoyed the movie, Dare to Dream, about a group of women who changed sports forever. Most were high school age teenagers when they were recruited in the ‘80s by Coach Anson Dorrance for the US women’s national soccer team based on a vision and tiny investment from US Soccer. I have to say that I’m embarrassed and disappointed that I didn’t know more about them until now, especially considering they are my generation and that one of its star players, Kristine Lilly, went to my husband’s high school, and we were likely living in Wilton, CT at the same time as she was. In fact, before watching the movie, the only things I could recall was “the bra incident” and the name Mia Hamm.

The reality is that these women played for the love of the game. They didn’t have the same dollars and investment that the men’s team had. And, they had to figure out what all professional women have to do – how to balance family and work. When one of the young players in her twenties decided to start a family, she thought her “soccer hobby” was over, but thankfully her coach encouraged her back on the field. But, while we office professional women can thank the discrimination laws for equal pay for equal work, there are no such laws protecting female athletes and other creative artists whose pay is dictated by the market force of butts in seats and TV viewing that fuel sponsorship dollars.

So, you would have thought after they had finally proven their ability to get butts in seats in the 1996 Atlanta Olympics, that sponsors and others would have taken notice. It took a labor boycott in advance of the 1999 World Cup for them to negotiate only some of the same terms in their contract as the men. And, as women of many professions have found, their abilities to succeed were called in question in the media – could they really fill the seats in Giant Stadium and the Rose Bowl? They did what many women have had to do – they worked harder. Not just on the field, but at building a fan base and in their grassroots ticket selling efforts. In fact, they played to a SOLD OUT stadium of screaming and fanatical fans of all ages and genders.

Brandi’s shirt ripping off gesture was not just about that win. As she whooped it in the air with her right hand – just like Lady Liberty holds the torch in hers – it was a symbol for the change and revolution that this team of amazing women had achieved.
Posted by Cathy at 11:55 AM