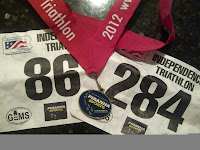 One year and three triathlons later makes a big difference!  I was excited to return to the event that had marked my first ever triathlon and to be joined by Barb and my husband Mike.  We all had a great race with Barb and I chopping multiple minutes off of our time, and Mike, who watched from the sidelines last year, joining us for his first race.

This year I practiced flat tire changing a week in advance instead of a last minute day in advance.  Mike and I fortunately had the opportunity to practice in the lake the day before and we took a ride around the bike course. The only small snafu was that my triathlon watch decided to die this week but I was pleasantly surprised to find a replacement in Walmart when we stopped for a few provisions.  After a nice dinner and a soothing jacuzzi, we went to bed around 10pm and I fell asleep quickly, unlike last year!

So as the alarm went off at 5am, I popped up, was organized and packed from the night before, and this time remembered to eat my breakfast.  Going down my checklist, I kept Mike organized as well.  I had warned him how fast the clock ticks, which he came to realize as we still headed out 10 minutes later than planned at 5:40.  But arriving at the transition area I was much more organized than last year so I had just enough time to set up my area and put on my wetsuit.  It helped that Barb and I were in wave 2 and Mike was 10 minutes later in wave 4.

And we were off!  I sighted the first buoy often, determined not to make the same mistake of going off course as I did last year.  Neither the swimming mob nor the plant infested, dark water lake freaked me out so I warmed up going out the 200 yards to the first buoy.  Rounding the second buoy, I sprinted my way in for a personal  record .25 mile swim in 8:22 and cutting more than 10 minutes off of last year's time!

This year I had my wits about me enough to remember to start taking my wetsuit off as I exited the water and ran into T1.  I still wasn't immune to mistakes though as I realized I hadn't unvecroed my bike shoes.  I also had multiple attempts clipping my shoes into the pedals on the incline at the bike start despite having practiced it.  But once on my new Specialized Amira racing bike, I sped off and did more passing than being passed, except for the pro men on their triathlon bikes with whirring wind resistant wheels that cost more than many people spend on a car.  And there was that one 59 year old woman who passed me - inspiration!  I was happy to shave 1:36 off of last  year's time.

Coming into T2, I looked at my watch and I was 49 minutes into the race so I had motivation to give the run my best as I was exceeding my time expectations.  I had seen Barb on the bike so I knew she had been doing alright but I had not seen Mike so I was worried if he had made it out of the swim ok.  But after the run turnaround we passed each other.

I thought Mike would catch me but I wasn't turning around to look for him - I kept my eyes on the finish line and ran 3:27 faster than last year!  My overall time of 1:06:22 (11/27 in my age category) was a full 16 minutes faster than last year!    I cheered on Mike a couple minutes later who I think should earn some sort of first timers award for his 00:57:41 finish, especially since he just started swimming a couple months ago!  Just think what he could have done if he had been on his Felt rather than his $95 Schwinn!  And Barb cut a full 5 minutes off her time too!

Now if I can just get better at being the car navigator.  Even google maps couldn't help keep me on course as we ended up with the scenic Poconos route coming home... 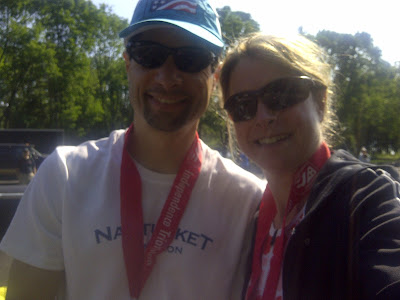