I have several friends who have adopted older children who would not be able to reach their full potential without the loving support of a structured family environment.  This is the story of one of those situations.   When Marcus Dixon McInerney no longer had a stable family environment, he was bouncing around friends’ homes and sleeping on their couches.  My book club friend Rose McInerney and her family took Marcus into their home when he was a sophomore at Stamford High School.  While Marcus excelled on the football field, he struggled with his academics but through the support of his new family and the community, he progressed and ultimately was accepted at West Point.  Unfortunately, Marcus died last year in a very tragic accident.

The McInerney family has started a non-profit organization, MarcUS for Change, with a mission to improve the academic, social, and mental well being of at-risk middle school boys.  They are partnering with many organizations in the community who already offer services that can help, including the Stamford Public Education Foundation (SPEF).  Judging by the turnout of this weekend’s inaugural 5K run / walk fundraiser, they are off to a good start.

I’ve now been part of a number of races and I have to say that this event excelled in so many ways.  Even Stamford Mayor Mike Pavia said so as he kicked off the event and expressed his surprise for the turnout, organization, and enthusiasm for a first year race.  A local radio station energized the crowd with music.  Stamford native and emerging pop star Angelica Salem sang the national anthem and performed post race.  And, there was abundant food post race. 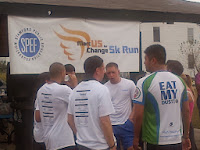 Oh, yes, there was a race too!  Cove Island Park served as a great venue for the race.  The nice, flat course around the Park and the surrounding streets made for a pleasant run.  Not wanting to be tackled, I started about 10 rows back behind the football players (well spotted in uniform) and Army dudes.  I did actually pass at least one of the football players as well as the teenage girls who I could tell were starting way too fast (ha, wisdom before age).  Since I haven’t really been running much lately, I was just treating this as my workout for the day but I was happy with my 9:30 pace for a 29:35 finish and actually finished 3rd place in my age group!  While it certainly wasn’t by best 5K (which is 27:47), I still beat my early 30-something self (as I described back in a prior post, I ran my very first 5K in 33:21).   Mike had one of his better 5Ks at 23:25, placing 12th overall and 2nd in his age group. 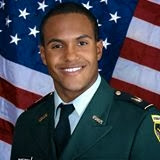 For more information about Marcus’ story and the organization that has been founded in his memory, visit http://www.marcusforchange.org/