The progression of my triathlon journey was so evident last weekend.  It’s been a little over two years since I started on the TriDot training program and one year since I became a TriDot ambassador.  When TriDot announced the Ambassador camp, I declared my February birthday present to my husband Mike.

I trialed TriDot through its preseason project in late 2017 to get started training for my first 70.3 race.  Two months of free of training -- what did I have to lose?  I fully expected it to be some sort of marketing ploy, rather than the game changing program that it has been for me.  Seeing progress in my performance after two months and feeling like it was giving me good direction, I stuck with the plan “for a little while”.  After all, I was probably just going to do this one 70.3 and then go back to doing sprints and Olympics through my self-coaching methods.  It didn’t turn out that way.

Back then If you had told me that I would go on not only to run farther without injuries than I ever had, to finish the 70.3 feeling strong, and to declare that same day that I thought I could do a full Ironman, I wouldn’t have believed it.  Within a couple months after finishing Ironman Atlantic City 70.3, I signed up for Ironman Maryland and applied to become a TriDot Ambassador, seeing how life changing this program was for me.

For the last two years, I’ve enjoyed the camaraderie of the IAMTriDot and TriDot Ambassador Facebook communities.  It was such a thrill to arrive at camp and meet so many virtual friends face to face.  It began on Thursday night when fellow CT resident Kristin -- my weekend roommate -- showed up at my house for next morning’s early JFK flight to Austin, TX.  It wasn’t hard to spot fellow TriDotter’s at Austin’s airport – our TriDot and Ironman apparel was a dead giveaway!

On Friday afternoon the staff welcomed us and led a social run along the river followed by dinner at Austin’s Faregrounds, an upscale food court with many dining options.  While it’s always great to be in the company of fellow triathletes who share your passion for the sport, our language around the dinner table took it to a whole new level as we talked about years on TriDot, “Train X”, “Race X”, and all of the parts of the country represented by our gang of 80 attendees.

On Saturday morning, I was so excited to swim in Barton Springs, an expansive, three-acre sized fresh water pool I had seen in Triathlete magazine years ago.  The spring-fed pool maintains a temperature of 68-70 degrees year-round and was a great opportunity to debut my new Roka wetsuit.  After a quick hot shower, we walked over to our reserved section in Zilker Park for breakfast and a presentation on running biomechanics by Coach Jeff Raines.  Wow, I was blown away!

Jeff is a running encyclopedia, and I quickly realized how much I have to learn to become a faster and more efficient runner.  This was further evidenced as we moved into an hour of running drills.  Jeff would expertly demonstrate a drill and we would clumsily give it our best effort.

By lunch time, we were famished!  Fortunately, a variety of ethnic food trucks are a short walk away from Zilker Park.  After lunch, we quickly dropped off our gear at the hotel and headed outside for a running shoe discussion.  Jeff must have a room dedicated to all of his running shoes given the plethora of brands and models he displayed.  Then we put all of the running theory to practice with some fartlek, tempo, and fast paced running intervals.  The key things I learned through these running sessions are:

After finishing a little extra running to hit my long run workout and a quick shower, it was dinner time.  Our bus descended upon Matt’s Famous El Rancho, an Austin Tex-Mex institution since 1952.  It’s fitting that Matt was an Olympic cross country gold medal winner runner in 1942 before founding his restaurant.

The dinner conversations got deeper as I learned the story of how Yoli, whom I had met on the social run, had escaped Venezuela and gained political asylum more than a decade ago, leaving behind her family and an established business to start over rather than face jail.  I learned how Coach Tri Silk, whom I had previously met at Eagleman 70.3, is an FBI agent by day and a coach on the side to help athletes like Adam, sitting next to him.  Adam had gastric sleeve surgery and through a combination of the surgery, a new diet and exercise he lost 230 lbs. and finished Ironman 70.3 Augusta this past year!

On Sunday, we headed to the Austin Aquatic and Sports Academy, with a large 25 yard by 50 meter heated pool.  Coach Raines shared with us some swimming tips which we then had an opportunity to practice in the pool.  For me, Coach JoJo recommended I focus on my entry and catch.  My need to focus on this was not new as it’s what my swimming video analysis had revealed last year.  But the proposed solution was different – rather than focusing on bringing my fingers and hands down perpendicular to the water (which according to the coach I wasn’t doing anyway because my hands were smacking down flat in the water at times), she wanted me to punch the water at a downward angle and then do my catch.  It seemed counter intuitive but the theory goes that you will then set yourself up for a better pull.  I worked on it at the session, but then upon returning home as it’s becoming more natural, it definitely feels more efficient.

A key Sunday highlight was hearing from CEO and founder Jeff Booher, with whom I had spoken at the bar Saturday night.  I had recently listened to a TriDot’s podcast in which Jeff shares how the preseason project and the company has evolved – it’s a fascinating story of having the vision that there is a better way, the belief that you can chart a path that’s never been done before, and the guts to make it happen.

Part of what makes TriDot so special is that its staff is grounded in and actively lives a solid set of core values.  Jeff Booher has hired and empowered an awesome, competent, caring and humble small team.  Coach John Mayfield, VP of Athlete Services, trained with Jeff in the early days and ultimately quit his lucrative banking career to pursue his new passion.  Coach Elizabeth James, who recently turned pro, gave me a big hug as we met in person for the first time after she had helped me understand why my Eagleman run was tough and had given me the confidence I needed for Ironman Maryland.  Andrew the “average triathlete, voice of the people”, a former television producer, is the newest member of the team and the moderator voice of TriDot’s now popular podcasts.  Coach Jeff Raines, as I’ve previously described, is just plain awesome in his knowledge.

And Cindy Reeves, is the customer, friendly, operational powerhouse making all of the logistics and support run smoothly.  Cindy has probably interacted with every athlete in some capacity and it was touching to see her warmly greet and hug people and put faces to names. 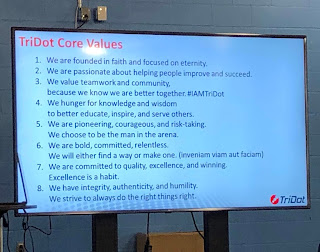 It was remarkable observing how we TriDot Ambassadors share the same temperament, values and behaviors that TriDot’s staff exhibit.  Humbleness, gratitude, and focus on the next step of each of our journey’s was on full display throughout the weekend.