Twas the Night Before Nantucket 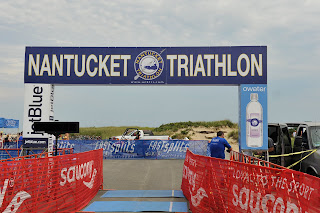 My Christmas in July present arrived a month before the July 23 race. My waitlisted number for the Nantucket triathlon came up -- I had 24 hours to decide if I could extend all of my distances and find a hotel on a crowded summer island. I texted Barb who responded with all the considerations such as the 10% training rule – she was being too logical. Having just come off of my first tri, I was feeling like I needed motivation to train before the September race. So in a switch, she was rational and I was emotional! My Dad, being Dad, worried, “oh, there could be sharks” upon hearing the swim would be in the ocean. Sharks were the least of my concern! The cost of the hotel was my bigger concern, but at least they had a triathlon rate to take the sting out of the peak summer rate.

I’ve decided to wear my new bike shoes and clips and look like a real rider – and hopefully have the speed to go along with it. After much debate on the wetsuit, I’m feeling more comfortable swimming in it without impacting my breathing so I’ll wear it again. I’ve had around 8 open water swim practices so I’m hoping for a much better swim this time around. Socks or no socks? I think not, but I’ve packed them just in case. I know if I don’t wear them, I’ll have blisters on my feet by the end, but I should be able to make it through the run without them and save on transition time.

I’m much more relaxed and confident this time around. The $5,000 Cervello bikes don’t phase me as I check in and receive number 792. I did request to be in the beginner wave, which will be wave 7 of 8, just to increase my chances of a better swim without the aggressive types. It doesn’t change the fact that I’m still competing in the women’s 40-44 division, which is actually a very competitive division. I have to compete against the moms who spend much more time training than I do (my swim coach used to train the Greenwich, CT tri moms who work out as much as 3 times a day!!!)

I have all of my supplies this time around – except some shot blocks which I’ve now shopped for unsuccessfully in 4 drug stores and supermarkets. Next time, I’ll stock up on them when I go to my local tri or bike shop.

My biggest worry this time around is actually the heat, especially since they announced a 12:30pm race start instead of 8:00am this week (apparently the residents complained about the road closures). Driving up, the car thermometer hit 102 degrees in this brutal heat wave that’s taking over the country. The forecast for the island is in the low 80s – I’m hoping it holds true. Barb texts me and reminds me to hydrate well the night before – but not with too much water. The race sent out a rather confusing email from a physician advising on the right ratios of water versus electrolyte liquids. Just when I think I’m knowledgeable, there still remains so much to learn to optimize your race!
Posted by Cathy at 8:57 PM