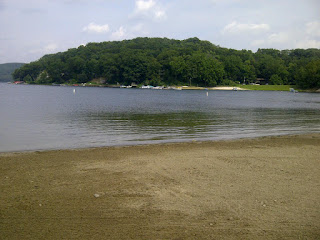 As I prepare for my third and final race of my first triathlon season, I have the advantage of both two sprints under my belt and being able to try out parts of the course in advance. Here’s the scoop on what I discovered when I visited the course a couple weekends ago.

The Park - There was hardly anyone there when we arrived around 11am and the lake was very calm with little boat activity. It’s a $13 entry fee for non-residents. An impending thunderstorm was keeping people away. Pictures attached of the park and beach area. It's hard to tell where they will do the transition area. The park closes after Labor Day Weekend, but the attendant thought you can still enter and swim at your risk after Labor Day (presumably for free).

Swim - The entry into the water is a dirt/sand mixture. A few rocks but not too bad on the feet. The lifeguards didn't know what the course will be and while the beach had two large swimming areas, they asked me to stay in one of the two and in front of the docks, which was fine. I swam for 20 minutes in my wetsuit and felt better than my first race which was also in a lake. There's some algae growing up from the bottom but not too bad and I saw some fish.

Run - I did the run route. When you go right on E Pembroke Rd you have a slight incline for a while and then a subsequent decline. Otherwise it's generally flat and meanders through residential neighborhoods.

Bike - We just followed the route in the car. I wouldn't recommend doing it without the roads being closed or unless they do a group training ride of sorts -- there's a lot of traffic and the roads are narrow and curvy in spots. The roads are in pretty good shape -- some rough spots towards the end of the route. When you first start out, there's a downhill and some big curves so you will probably need to be on your breaks somewhat. The rest of the course has a fair number of rolling hills -- not extremely steep, but long inclines in some cases and you will use all your gears. So I do recommend some hill training in advance of the race and insure your gears are working well. I mapped the ride so you can see the elevation: