How To Heal Road Rash 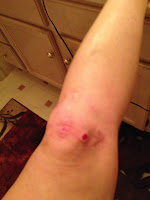 As you may have guessed by the title of this post, I had a small crash.  A small crash can be defined in that there are no broken bones, you can ride your bike home, and everything should heal in a couple weeks.  One of the most annoying aspects of a bike wreck is Road Rash.  Having 3 boys, a bike riding husband, and plenty of first aid experience to go with their multiple scrapes, I am well prepared.  My first encounter with road rash was learning to do hurdles on a cinder track.  Anyone who has ever crashed and burned on a cinder track, does not need me to elaborate on the importance of getting all of the grit out of a fresh wound.  Cramer makes a product called Cinder Suds which is a great addition to any biker's first aid kit.  However, since I did not have that product I went with a hot shower and antibacterial soap, yes it stings.  The first step to healing road rash (and protecting from any infection) is to clean the wound well, so after the shower I also poured hydrogen peroxide
on each wound. 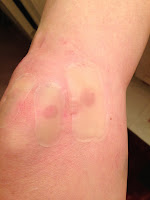 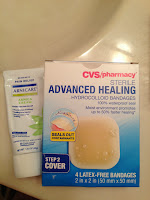 Next, I highly recommend Advanced Healing Bandages, there are generic varieties like CVS which work well, and they come in multiple sizes.  They cover the wound, are waterproof, seal out contaminates, and you can leave them on for up to 7 days or until they start to leak.  The best part is, as the wound heals, a protective pillow forms as the bandage absorbs exudate from the wound.  The moist environment prevents a scab from forming, but also facilitates the healing process.  If you have had an unfortunate run in with pavement, these are your new best friend.  Cathy had told me about arnica extract and it's healing properties, which is what I'm using on the giant bruise on my left butt cheek.  I will spare the readers this photograph.
The last picture is one of the wounds after 3 days, everything is starting to heal up nicely.

Finally, although I was lucky enough to have a "small" crash, I was glad
I had worn my "Road ID" in case it had been worse.  Every rider who 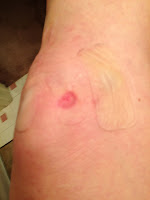 goes out alone as we do, should have a Road ID with emergency contact info, and medication allergies.
http://www.roadid.com/Common/default.aspx

What does one do after a bike crash?  An initial 24-48 hour period of wound care, ice, self pity, and further injury assesment is permitted.  Assuming your bike and body are in riding condition, at that point one gets back on the bike!