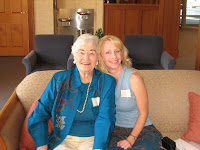 As I was driving to Grandma’s memorial service, it was like deja vu when I passed the College Street exit and recalled that was the route we took to Grandpa’s service.  I remembered that Derrick was with me, he had gotten out of school to attend the service but they also had a game that day.  Many relatives hadn’t seen Derrick, aside of pictures, since Lynne’s wedding.  The entire high school baseball team had dyed their hair bleach blonde as a sign of unity, and Derrick’s was long and shaggy.  We didn’t have time to get it trimmed before the service and I wondered what everyone, especially Grandma, thought of his unkempt ridiculously blonde hair.  During the service I took notes of some of the things people said about Grandpa with the intention of sending it to Jennifer, who couldn’t be there.
After the service, Derrick and I jumped in the mom mobile to high tail it back to the school so he could make the bus for the game.  It was the farthest away game all season, close to the Maryland border.  The Athletic Director said it was ‘policy’ that he had to take the bus and I would not be permitted to drive him there myself causing us to leave the reception early.  Derrick was needed by the team, they were out of pitchers and had he not been there they would have forfeited the game.  They were on the verge of making the playoffs, which the team hadn’t done in years.  At an interview where he signed his Letter of Intent to play for William and Mary, he had told the newspaper reporter that the team would make the playoffs that year.  He and his coach later laughed about his comment because their team was so young and it seemed an impossible task.  The game did not go as planned, and as games go, it wasn’t just one play or one thing that went wrong.  Derrick pitched well though, honoring his commitment to the team.  Late in the game he dove head first into second, which was typical Derrick style.  The short stop stepped on his right arm with his metal cleats, hopefully by accident but one never knows.  Derrick tried to yank his arm away, causing the cleats to dig into his arm and drag a long gash  across the inner side of his elbow.  They bandaged Derrick’s wound, and he pitched the last 2 or 3 innings of the game with blood streaming down his arm.  He was my hero that day even though we lost the game.  But the team did make the playoffs that year and maybe their fearless captain, Derrick, had helped the young guys to say if he can do that, we can go to the playoffs.  In the first round Derrick pitched the game of his life to defeat a team that was supposed to “go all the way”.  It was a gritty performance, and in the last inning we were only winning by a slim margin, with 2 men on base and 2 outs.  The coach intentionally walked a heavy hitter to load the bases and the crowd all held their breath as the batter who would win or lose the game came to the plate.  Someone in the stands said to me, how does Derrick do under pressure?  Clutching the rosary hidden in my pocket, I said with confidence, “Very well, if anyone can do it he can”.  And he did, striking out the last batter with crafty pitches to win the game and take our breath away.  He was my hero again and I was so proud to be his mother, I cried all the way home. 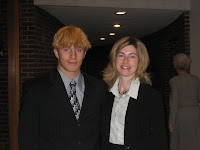 2007 was the most hectic and stressful year with Derrick choosing a college, Grandpa’s passing,  and Derrick graduating high school; leaving for Virginia and me to wonder what I would do without my buddy.  Later I couldn’t find the miniscule tablet that I scribbled my notes on from Grandpa’s Memorial Service and to this day I’m still looking.  Truth be told, I am just like Grandma, with multiple little jars of face cream and extra purses in a closet that I’ve long forgotten about, and a penchant for blue glass.  I save calendars of past years with noted scribbled on them and I don’t know why, but I found some old calendars when we were cleaning Grandmas closet and laughed to myself.  I have strange exotic items in my cupboard just like her, such as coconut milk and Chinese dinner kits.  I know I’ll come across my notes one day, stuffed in a purse or pocket, or in the back of a drawer.  I remember what people said about Grandpa though, they said he was a good man; and he was my hero for all of the wonderful things people said about his character.  I hope Derrick lives up to his legacy.
The last few years, I would call up Grandma and just talk about nothing and everything.  One night I called her at 9:30 or 10 pm because I knew she would still be awake; I was hard boiling eggs and couldn’t remember how long to keep them in the water.  The internet was down that night so I did what people used to do before google, I called Grandma.  We laughed together because she couldn’t remember either, and I could have cared less about the eggs.. maybe I just needed a good excuse to call her.  She always had good “home remedies” for illness like cherries for gout, and rubbing castor oil on achey knees.  When she passed away, looking around her house there were a lot of books about natural cures for illness.  She was drinking aloe vera juice the year before she died.  Now knowing she had pancreatic cancer, I can’t help but think that maybe it extended her life or was preventing the cancer from spreading.  The doctor told her to quit drinking it, but maybe she was right.
I took some notes of the things Grandma and I had talked about, and thankfully this time I remembered where I put them.  When Grandma was 92 she said, “I can’t believe I’m 92 - I don’t feel like it except that I ache.”  “The weather has to do with it I know, but I’ve forgiven the weather and sometimes you just have to put on your raincoat and go out in it.”  Grandma always had a way with words.  One day we got to talking about when she met Grandpa and she said, “I was still just looking at people, not so much looking for someone.”
We talked about driving and she told me, “I was 14 when my father taught me to drive.”  “Back then to get your license you would just go down and ask for it and they gave it to you, there were no rules.”  She also said, “Rick is a carbon copy of my father, I think my father was one of AAA’s first customers.”  “That is where Derrick Gets his navigating skills and flair for travel.. it was streamed down through to him.”  She told me that she wouldn’t drive in the fog because “I know if something would happen whether it was my fault or not, I would be blamed.”
The last family dinner party at my house that Grandma attended was called, “The Great Wall” party.  It was in early fall and David had slaved all summer to extend our stone patio and replace some rusty iron fencing with more permanent stone.  The project started out small and kept growing with 6 columns and new steps to the back yard.  I teased him that he was trying to build the Great Wall of China.  The timing of the party was perfect because Grandma had been to a lot of funerals and she needed something fun.  It was the best time, I had put pink, burgundy, and yellow fall mums in all of the planters and the patio was a grand masterpiece.  I had Italian cafe music playing and too much food.  When nobody else was around Grandma said, “I may not live to see Derrick get married.”  I think she was trying to tell me that she knew she was leaving me soon.
At the hospital the Saturday before Grandma died, twice she said, “well those days are gone forever” and I had a bad feeling.  I had brought her a card and raisin bran muffin because I thought something bland would taste good and she said, “did you make it?”  I sheepishly admitted I had purchased it at the store.  They were limiting her carbs because of diabetes, and I commented that maybe the nurses wouldn’t want her to have it.  To which she replied, “Well they don’t have to know everything.” 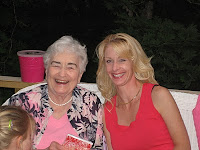 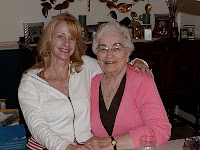 Every time I give somebody my unvarnished opinion, I think of Grandma as soon as the words are out of my mouth.  I cried every morning for a while after Grandma died and sometimes just for no reason at all.  I had saved a voicemail on my cell phone for 5 years of Grandma wishing me a happy birthday.  A few weeks before she died my phone conked out and I lost the message, I would give anything to hear her voice now.  If I had known it was the last time I would see her, I would have said more that Saturday in the hospital.  The flowers I sent to brighten her room in Swaim at Greenridge did not get there in time.  I’m sure she knew she was loved, and maybe that’s why she was ready to leave us on her terms, not ours.  She didn’t need the flowers, her heart was at peace and my dad was holding her hand.
Posted by Barbara at 5:40 AM