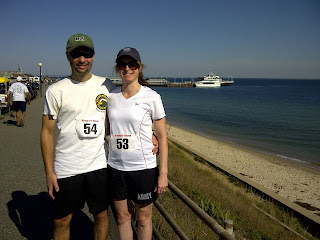 My husband Mike and I have a term for when we stumble onto something unexpected but truly delightful - it's called a "Christopher". In 1492 Christopher Columbus sailed the ocean blue -- we did the same this past weekend and were completely delighted by the Indian summer we discovered. Upon arriving on Martha's Vineyard, we found the natives busy preparing for the 22nd annual Columbus Day 5K road race. "Why not?" we (Mike, our friend Charlie, and I) all said as I proposed the idea. I'm missing racing already now that the tri season is quiet.

We stopped by the registration the day before and it appeared they were in need of some racers since we were numbers 53, 54, and 55. Our $15 got us a t-shirt, our registration, a bottle of spring water, and a snack bag clip (sometimes you gotta wonder how they come up with athletes' swag bag!).

Unlike my previous serious race endeavors, we did everything wrong the night before. Nothing like a greasy cheeseburger to sit in your stomach and plenty of alcohol to dehydrate us. And, the next morning while we at least thought to eat a bagel, the coffee only added to the dehydration.

There were no fancy timing chips for this race. All 191 of us (fortunately for the race organizers more people registered) gathered round, trying to jockey our way close to the front and we were off. I was surprised how quickly I felt out of breath -- I think by the time I got to the running in my tris, I was more warmed up. And then there was the issue of the jalapeño cheddar ground beef swirling in my stomach. Finally, there was the mid-day heat - a surprising mid-eighty degrees that along with the wrong beverage choices left me parched.

While there was one moment around mile two that my body was telling me to walk, I pressed on and crossed the finish line at 27:52 and placed 9/25 in my division - at 8:58 per mile it was faster than any of my tris and my normal treadmill pace. My husband, who is a natural athlete and works out every day but rarely runs, was 4 minutes faster than me. In fact, his running shoes are so old, he had to cut off a piece of flapping rubber!

We managed to get all 3 sports in this 3 day weekend - 2 bike rides and 2 ocean swims in addition to our 5K. The water was cold but manageable - swimming in the ocean on October 10 sets a personal record. It was a true "Christopher" weekend!
Posted by Cathy at 6:26 PM