Montauk: A Sprint to The End 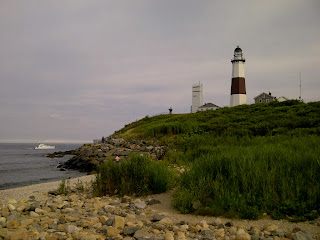 After Mike’s first triathlon in PA, I wasn’t sure if I would get him back into a triathlon swim as the “swim mob” nearly did him in.  But after the Stamford triathlon and some ocean swim practice, Mike was hooked to the multi-sport life.  And, he had to admit that it was more fun being a participant than being my triathlon lackey.  So when I proposed he could still get a charity spot for the Montauk Lighthouse Point Sprint triathlon on July 15, he decided it was all for a good cause!  I had chosen this race since it one of the longer Sprint distances (1/2 mile swim, 14 mile bike, 5K run), and I figured it would be a good progression to ultimately doing my first Olympic distance race.  I also chose the race for its bucket list location – I have always wanted to go to The End, as the eastern most tip of Long Island is known.


We drove out to Montauk on Friday the 13th.  Forty-five minutes into the ride we were questioning whether or not we had turned off the towel warmer at home.  Since 99% of the time, the answer to such on-the-road questions is yes, we decided to keep moving forward [upon returning home we discovered it on and realized just how lucky our Friday the 13th was!].  Once we reached the Hamptons, the summer traffic was in full force.  However, it was once we arrived to check into our hotel that Friday the 13th struck in full force with the “what’s your name again…um, no record of your reservation”.  Producing my Expedia reservation confirmation that I had received two days earlier with the “no further confirmation required notification” only got a “yes, that is a valid reservation.”  Our hotel immediately began calling around and asserted, “we’ve got you a room across the road at the Born Hotel for $250 per night but you have to say yes now since they have someone else wanting it.”  We took it sight unseen – the fear of having to stay miles away and navigating the summer traffic was too much to argue.
We spent the rest of Friday afternoon walking the town and scoping out dinner.  We also took a drive up to the Montauk Lighthouse, or truly “The End”.  Mike gracefully skipped along the rock path that surrounds the lighthouse and drops down to the ocean with no railing.  I decided this was one sport I didn’t want to partake in.  We tried to envision where the race would take place but with the waves crashing up against the rocks, we surmised the swimming portion must be elsewhere.  We concluded our evening with a superb lobster, mussels, clams, and corn on the cob full meal deal and some Italian cookies from the local bakery.
On Saturday morning we attempted to get up really early to do a bike warmup, but I had had a restless sleep so we were up at 8am.  I checked the course and we decided to do one leg of it and check out Gin Beach where the swim and T1 would be.  The bike course was flat for about two-thirds of the race but its final stretch included the hills up to the lighthouse, where T2 was located; nothing we haven’t conquered in our hilly Connecticut terrain.  Ten miles later we were ready for Anthony’s Pancake House.
We digested our breakfast by picking up our race packets and shopping for some final necessities.  I decided I wanted to carry a small water bottle on the run given the heat wave we had been experiencing.  When I couldn’t find a small one, I opted for buying and emptying a small lime juice bottle – it was the perfect size and I reasoned the squirt top would be perfect for on the go hydration.
We did a 10 minute swim warm up in the very wavy beach near our hotel, and then packed up our transition gear into T1 and T2 bags.  By 5:30pm, I was all packed up – a record!  We decided to not risk a restaurant prepared meal (given Mike’s last race bathroom issues) and just make our own pasta dinner since our $500 hotel spend came with a small kitchenette.  After dinner, we took an evening stroll – a sorbet stop seemed ok for pre-race diet.  By 9:00pm, we were in bed and feeling organized and prepared for our 4:50am wakeup.
We awoke at 4:45am.  I slept better than the night before but it was Mike’s turn for a restless night.  Nevertheless, the adrenaline was in full force.  I had reminded Mike how fast race morning goes – once again, we needed every minute, especially with the two transition areas.  After we had dropped off our gear in T2, I realized we should have counted the transition rows to insure we could find our gear (we both would later lose some seconds as we searched for our T2 spot).  We had to park and walk our bikes about ½ mile to T1.  T2 set up, two bathroom runs, body marking and chip fetching further ate minutes.  Then, we had to walk another ½ mile down the beach to the start.  We made it with just comfortable minutes to spare.  Others were not so lucky and were running down the beach and starting with subsequent waves.
Mike’s wave went first followed by mine a few minutes later.  Since it was a point to point swim course, it seemed straight forward.  I was grateful when someone in our wave said there were 4 buoys after the start buoy – I hadn’t thought to count them but it helped me consider my swim pace once we were in the water and lost all perspective.  Mike was out of the water in 18:10 and I came in at 23:45 – both times longer than anticipated but I suspect the current may have been slightly against us and the run up the beach to the timing mat was significant.

We passed each other going in opposite directions on the bike.  I was going at a good clip, but not passing as many people as I often do, I think a combination of some very strong cyclists on expensive bikes and the waves that preceded me were on average the faster groups.  Mike had spent Friday afternoon putting a bike computer on my bike but I had forgotten to reset it after our warm up ride so I wasn’t completely sure how I was doing with my speed.  I ended up being happy with a 18 mph pace for a time of 46:35 and Mike was happy with his 20.8 mph pace at 40:22.

Once at the Lighthouse T2, we ran through the paths of Camp Hero.  Once again we passed each other going in opposite directions.  Having spent a lot of energy on the bike, my run felt on the slow side, especially given the heat although I managed a 9:41 per mile pace at 30:06 and Mike did a 7:52 pace for a 24:28 run.  We both saved some fuel in the tank for a final, strong ascent up the hill to the lighthouse, with Mike passing a man and me passing a woman in the final stretch.  As I crossed the finish line at exactly 1:44:00 for my wave, I heard them announce “Catherine Mayone, Stamford, CT”.  Mike met his goal of finishing in less than 90 minutes at 1:27:28.  A very cool finish at THE END indeed! 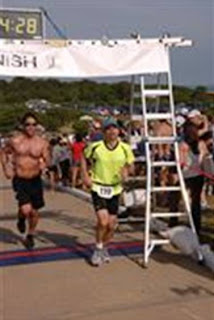 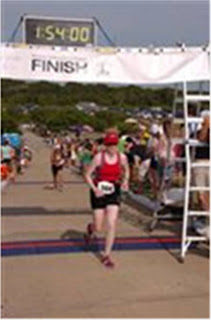