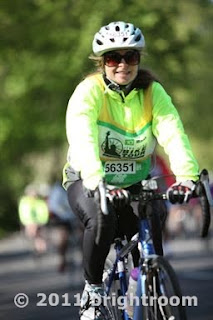 I was lamenting that I haven't had a lot of time for blog writing the last few weeks. A Friday the 13th "gift" of 5 hours in the airport due to a cancelled flight has given me some time to write about a great bike ride a couple of weeks ago.

Every year for a long time, I've said "we've gotta do the 5 Boro Tour this year". One year we got as far as signing up but had to cancel at the last minute -- a combination of injury, rain, and work. Other years, by the time we thought about it, the Tour was sold out. This year, I marked the registration date on my calendar and made it the first thing I did that morning. Good thing I did - the Tour sold out all 32,000 spots in one day!

The 5 Boro Tour is a 42 mile car free bicycle route that starts in Manhattan, briefly crosses into the Bronx, heads down through Queens and Brooklyn and then traverses the very lengthy Verazzano Bridge to Staten Island, where the finish festival is. Participants can then take the Staten Island Ferry past the Statue of Liberty back to Lower Manhattan. It all started in 1977 with 250 participants as a high school project on bicycle safety. It is now the largest mass cycling event in the United States!

Since it has an early start, Mike and I decided to get a hotel in lower Manhattan the night before. Our hotel overlooked Ground Zero. Little did we know the site would become a gathering place the following night with the announcement of Bin Laden's death. After checking in, we headed to Little Italy to meet some friends also doing the Tour and to load up on some carbs.

We decided to get up early so we could claim a spot at the front of the Tour -- we had read that the front moves at 15mph while the rear at 6mph. A tip for next time --get up 1.5 hours later and just join the front of the Tour from a side street! After much waiting and moving blocks at a time, we finally got to the start line. The speeches and "entertainment" seemed to take forever, and then we were finally off.

We made our way up the Avenue of the Americas (6th Avenue) and past Rockefeller Center. Fortunately, we got past a parade before it crossed 6th Avenue (amazing how much NYC can organize, manage and accomplish in one day!). We were slightly delayed before being allowed to enter Central Park as the roads narrow and they needed to spread us out. I thought I would enjoy the Central Park route more, but it was a bit crowded and slow.

We continued up through Harlem and then crossed the Madison Avenue Bridge into the Bronx -- I guess just to say we set foot in our second borough, the Bronx, since we weren't there that long. We continued on and over the Third Avenue Bridge to get on the FDR Drive back in Manhattan -- the highway that goes down the East side of Manhattan that is usually congested with cars.

We crossed over the Queensboro Bridge into Queens. We stopped at the Astoria Park rest stop for some food since we hadn't eaten breakfast other than a couple of granola bars. Bananas were well supplied at this and each rest stop. From there, we made our way through the Greenpoint and Williamsburg neighborhoods in our fourth borough, Brooklyn.

Wow, pretty cool riding on the Brooklyn Queens Expressway (BQE) with all of the cars in the opposite direction honking their horns to cheer us on. But, who would expect a bike traffic jam! I guess this is NYC after all. Unfortunately, even we bicyclists were not immune to construction and narrowing lanes!

We stopped at one more rest stop before making our way over the very long Verrazano-Narrows Bridge, another highlight of the trip being able to traverse the car lanes via bicycle. At the end of the bridge, we entered our final borough, Staten Island, where the "finish line" and festival were located. While some people end there, we needed to make our way back to Manhattan so the route continues a few more miles to the Staten Island Ferry. We seemed to time it just wrong and our "15 minutes" advertised wait turned into 1 hour.

Despite some delays during the route, overall it was a great day. The weather was perfect and we joined people from many states and countries getting out for their first long ride of the season -- everyone was all smiles! Perhaps because there had been so much to see along the way or because of all of my triathlon training, it felt like my easiest 42 miles ever.
Posted by Cathy at 4:13 PM